Castleton University continues to monitor and assess the continually-changing situation with COVID-19.

Skip to Main Content
Home About Castleton Office of the President

Office of the President 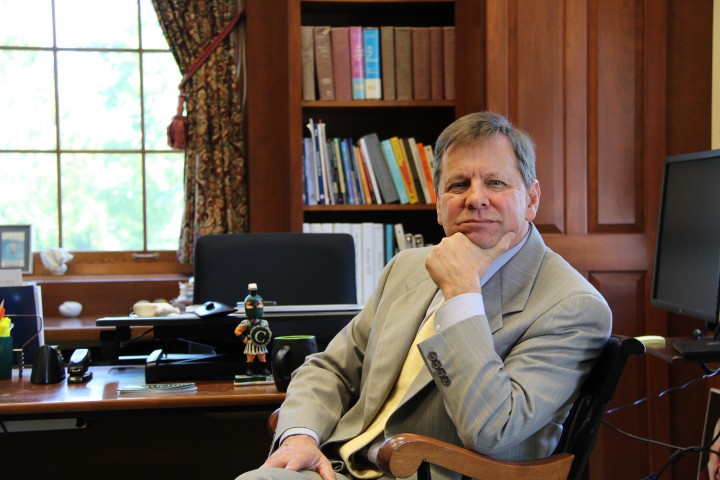 Dr. Spiro provides a wealth of administrative and education experience, having served in a variety of academic posts since his arrival at Castleton in 2002. During his time at Castleton, he has served as interim provost, academic dean, dean of the College of Arts, Humanities, and Social Sciences, and Chair of the Department of History, Geography, Economics, & Political Science. As a professor, Dr. Spiro was the recipient of the Outstanding Faculty Award for his courses on history, politics, race, slavery, immigration, the ancient Maya, and the nature-nurture debate. As a professor at the University of California, Berkeley, he twice won the “Distinguished Teacher” award.

Dr. Spiro is known nationally as a leading authority on the eugenics movement, and authored the critically acclaimed book “Defending the Master Race: Conservation, Eugenics, and the Legacy of Madison Grant.” He is frequently called upon by national media, including The Atlantic and The New York Times, for his perspective on race and nationalism.

Dr. Spiro on the unique value of Castleton University

Like many Vermonters, I have not driven to work in six weeks. But yesterday I had to go to the office (which in my case is Castleton University) to attend to some essential business for the state. As I drove down Main Street in Castleton, I passed the 18th-century tavern where Ethan Allen and Benedict Arnold plotted their successful capture of Fort Ticonderoga. I passed the 19th-century Federated Church whose stately spire has towered above the Castleton River since the presidency of Andrew Jackson. I passed the 20th-century Birdseye Diner, that iconic slice of Americana (where you really must try an iconic slice of their banana cream pie). And then I turned left and drove onto the gleaming 21st-century campus of Castleton University. And I am not ashamed to admit that, after a month away from my university, my eyes filled with tears of pride and joy. My emotional response was assuredly magnified by the fact that the sky was a perfect azure blue, the sun's rays were glinting like diamonds off the surface of the pond, and the colorful tulips — oblivious to the health crisis raging in the rest of the world — were blooming along the edges of our perfectly manicured green lawns. But the main reason I felt such joy was gratitude that our magnificent campus was still here, patiently waiting for our students to return in August.

Castleton University was founded in 1787 (the same year that the Constitution of the United States was written). We are Vermont's first college and the 18th oldest college in the country. With over 18,000 alumni, 2,000 students, and 350 faculty and staff, Castleton University is the educational, cultural, and economic engine of our region.

When Green Mountain College closed its doors last year, Castleton was here to accept their students with open arms. Similarly, when Southern Vermont College and then the College of St. Joseph ceased operations, Castleton again helped their students achieve their educational dreams. And — along with the rest of the Vermont State Colleges System — we continue to stand by, ready to provide all Vermonters with the skills, training, and support they need to permanently improve their lives and the lives of their families.

Our alumni regularly tell me that the four years they spent at Castleton were the best four years of their lives. That's not surprising, as our campus is truly an exhilarating place: hundreds of eager young adults studying, learning, debating, going to plays, cheering at football games, performing experiments in our new million-dollar science labs, skiing at Pico Resort (our students ski for free at Pico), working on projects in our state-of-the-art graphic design lab, and, most importantly, preparing to make Vermont a better place when they graduate.

When I bump into students on our walkways, I ask: "Are you having fun at college?" And they say: "You betcha!" And then I ask: "Are you getting good grades?" And they say: "Yes, sir!" And then I tell them: "I'm glad you're having fun. And I'm thrilled you're getting good grades. Now can you tell me how you're preparing to make a difference in Vermont when you graduate?" And they almost always have impressive responses, like: "I just started the Small Business Club." "I'm helping my Psychology professor do research on the genetics of addiction." "I teach English to non-native speakers." "I'm studying chemical reactions that can be utilized to make biofuels as an alternative energy source." "I'm doing an internship with the Visiting Nurses Association." "I'm researching the causes of phosphorus blooms in Lake Champlain." "I'm going to Iceland with my science professor to research climate change." In sum, this generation of students is involved in admirable and important ways.

And it just so happens that all of this involvement pays off. Literally. Students who earn a bachelor's degree have a huge economic advantage. The average college graduate earns $78,000 per year, compared to just $45,000 per year for those with only a high school diploma. That's $33,000 more every year and well over $1 million more over a lifetime. From a financial standpoint alone, therefore, earning a bachelor's degree is a sound investment. Now, I happen to think that one should not attend college just for the money; but it is nice to know that our students' time here will be an investment in their income as well as their intellect and their happiness.

Castleton alums live and work in every town in Vermont, where they go above and beyond to contribute to their communities. My accountant is an alum (and a really nice guy). My lawyer is an alum (and a really nice guy—for a lawyer). My son's teachers are alums, as are most of the administrators in his school district. And when I went to Rutland Regional Medical Center for my colonoscopy all the nurses in the room were — you guessed it — alums (which was totally embarrassing yet comforting at the same time).

Furthermore, graduates of the VSCS play an outsized role in the economies of their communities. Over the course of a lifetime, the average bachelor's degree holder will funnel into their local economy $278,000 more in buying power than the average wage earner with only a high school diploma. These same alumni will also contribute $381,000 more in taxes than they use in government services and programs over a lifetime.

Like every other institution in the U.S. — with the possible exception of Procter & Gamble (maker of Charmin) — the VSCS may have to right-size in the face of a brutal pandemic that suddenly dispersed thousands of our students. But when our students return in the fall, we will be here as always, offering vital programming in the arts, unparalleled athletic facilities, and 89 two-, three-, and four-year degree programs delivered in face-to-face, online, and hybrid formats. Castleton will continue to educate the future scientists, nurses, social workers, educators, and business persons who will tackle the current health crisis, get Vermont back on its feet, and make sure that we are ready for any future crisis.

We have been buoyed by the outpouring of public support in the past month for the VSCS. However, the stunning fact remains that our system receives less than half of the state funding that other New England and New York public colleges receive (and those colleges howl that they are severely under-resourced). Let me put it this way: when I started my teaching career, Vermont ranked 3rd in the nation in spending on higher education; we now rank 49th in the nation. As a consequence, in recent years Castleton has repeatedly engaged in painful budget cuts and agonizing personnel cuts. It is time to reverse this shameful trend.

I accept that some people do not consider spending on higher education to be a priority; but any impartial analysis reveals, to the contrary, that investing in the Vermont State Colleges System is crucial to our economy and our future. The education we provide here at Castleton is needed now more than ever before. As our state leaders grapple with unprecedented challenges, it would be prudent for them to bolster the VSCS because — like Ethan Allen and the Green Mountain Boys, who convened in Castleton just 12 years before our founding — we do heroic things with minimal means. We are an invaluable asset to this state and I fully expect us to continue to be vibrant well beyond the 21st century.